To my dad, and my father-in-law, and my brothers-in-law, and most of all to Hubby, without whom this holiday would not be celebrated, if y’all know what I mean. I thought the “Luke, I am your father” meme was awesome, until I saw this one. 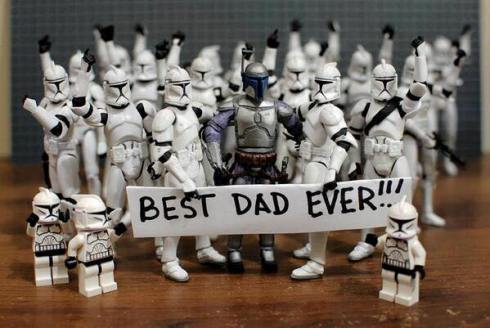 With special thanks to Rabid Alien!

The Shift of a Compass

Let me preface this by saying I consider myself lucky to have friends. One can never have too many. Growing up they came and went out of my life with regularity, and some have passed on before their time. But I never regretted the time spent with any of them, whether in anger or laughter, in sadness and joy, in cacophony and silence. Every one was a blessing unto my life, even the ones who chose to leave.

Back in the days before social media, we were comfortable not knowing every particular tidbit from every particular friend. I had no ideas on their religious convictions (even when we attended the same church), their political leanings, their discriminatory views (and by this I mean likes and dislikes, not racial bigotry), and outside our high school football team, not even sport fandoms. Personally, I didn’t think it was any of my business, and if they liked the Dallas Cowboys, that was their cross to bear. But social media has made it easier to put one’s views out there. Sometimes that makes friends aware that they don’t have so many things in common with each other, and the dreaded happens.

In the interest of our friendship….

Those are chilling words to read on one’s media. At first it seems they are trying to cushion a coming blow, but that’s the masquerade. Those words come right before being told how “wrong” or how “bigoted” or how “evil” your statement is. It isn’t a way to soften the rebuttal but rather an implied threat. I don’t agree with you and our friendship will suffer for it. And I have to wonder why. Why would any friend consider a different opinion cause to sever all ties? I could understand if my opinion went against the law or broke social taboos but that wasn’t the case. It was a case of the mirror having two faces: two different ways of looking at one thing. Ignoring one face over the other simply because you don’t like it is a disservice to others and to oneself. Always remember: one must always play “devil’s advocate” and question everything; living in an echo chamber gets very old, very fast; and no one has a right to be offended. No friendship should ever be tested because of discourse. Differences of opinion are valuable, necessary, and natural. To think otherwise is to be myopic about the human condition.

And now that I have done my deep thoughts for today, it’s time for another cup of coffee 🙂

General Random Stuff That Makes Me Not So Happy

Sorry I have been absent from the blog so long. It has been a rather weird few weeks since school let out. I find myself making list after list of things to pack up and things to purge and things to finish and the only thing I have done is write the lists. So much fail, I know.

Yesterday I was in the checkout line at the grocery store wondering what to make for dinner even though I was actually purchasing food when I saw a little girl looking at the magazines on the rack. She was looking at some young actress who was on the cover with her hair blown away from her face, her arms at her hips, and her face a mask of what I can figure is “anger” (but most likely a product of “Pout for me, dahlink!!” from the photographer). And in what can only be described as sadness, I watched her pretend to be just like that glossy, unrealistic photograph: arms at hips, lips pouting, hair being tossed back. I hate those magazines. I really, really do. They are in the business of making every single woman feel UGLY!!! I have zero respect for a periodical that tells me I need to dye my hair and lose those pesky pounds or I will lose him and not get promoted to my dream job. We women are contrary creatures. You tell me I need to lose weight, and I will grab a quart of ice cream and eat it all while smirking in your face. And I will love every single spoonful!!

I went to make an appointment for my dogs to be groomed because I am far to busy making lists to do that, and when I whipped out my iPhone 3 to put the date in my calendar, the receptionist told me I should upgrade to a better phone. She told me. First, it isn’t anyone’s business what phone I own, and second, her name was not Graham Bell. I was a bit stunned at first, but then she went on about how new phone have better technology and you can do so much more with them. I politely asked what, and she informed me that Candy Crush and some muffin game were in HD now. I asked about GPS and she replied (and I kid you not), “I don’t play that game.” I took the opportunity to let her know I prefer a phone that is so outdated the NSA can’t track me. She asked if that was my parents’ service. I said yes and then just left. Honestly, I can’t even.

So that has been my week so far. I realize it is only Tuesday so there is plenty more that can possibly set me off like a firecracker, but I prefer to be positive and look on the bright side of things. Well, metaphorically speaking anyway, since another storm system is moving through here. And of course, Blue Bell™ is not yet back in production. This whole positive thinking is hard without Blue Bell™ and sunshine, so I’m going to stop rambling and go watch Ghost Whisperer and eat some yogurt. If that doesn’t work, five o’clock will eventually come around 😀

Relax, There’s Vodka For That

This is the last week of school, y’all.

I am not looking forward to the summer like most people are. Son is graduating and getting ready for college. And that means my anxiety is growing as the apron strings get cut once again. For someone who has big plans for an empty nest, I sure have issues when the chicks decide to leave it. I admit it was difficult to get used to Eldest’s departure for the military. Now with Son’s impending departure for college, I am left behind with one chick, and she isn’t the most amiable towards my melodramatic angst.

I think her exact words were, “Get over it.”

Sigh….. It will be difficult but I am sure I will get over it eventually. It’s not like I am constantly checking up on Eldest. So what if I know her work schedule and know when she should be in her barracks? I’m her mom, so I can’t be charged with stalking, right? This parenting thing is hard, learn-as-you-go and sometimes thankless, but they never tell you that all you go through is a piece of cake compared to them leaving you. At least Son will be able to come home for some weekends and holidays so the break will be slow, like ripping a bandage or twisting thumbscrews.

I did mention my melodramatic angst, right?

I know my parents are laughing at me. Come to think of it, so is my sister. And most of my friends. I know this isn’t as bad as I make it out to be, and it definitely isn’t the end of the world. It’s a new beginning, and I just hope and pray that each one is ready to face the world alone. My apron strings are being cut and Hubby tells me they can’t be sewed back on.

But there is always Velcro™!! 😀