First week of school, and already I feel like I have signed enough paperwork to file an appeal to the SCOTUS. I don’t know why I was so excited for them to go back to school.

Oh right… peace and tranquillity. I can live with signing stuff for a while.

Anyway, it’s Thursday, and time for another Never List. This is a list that evolves, though, because it centers around food. I’m not talking about rare stuff like balut or haggis. I’m talking about foods you have access to eat on most occasions. There are some things that will ALWAYS stay on this list, no matter what. Some y’all will like, others you will probably ban just from the description. So, here are my top five of foods I’ll never, ever eat. 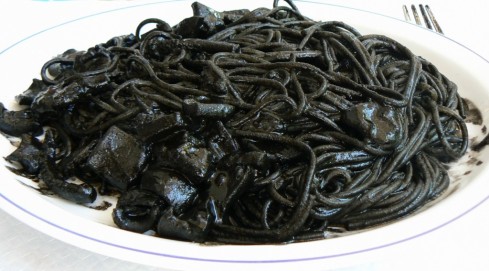 Seriously, what is the attraction to that? It looks like you are ingesting an alien larva.

The slime alone is enough to send warning bells through my digestive tract.

Because I really don’t care for fava beans and chianti.

If I wanted sulfur in my diet, I would eat rocks. The thought of ingesting either of these foods is enough to turn my stomach. I would rather shave my legs with a weedwacker than eat that stuff.

I am sure some will find my list a bit on the what-the-hades side, but I am more than sure some of the food y’all wouldn’t eat is on my list of noms 😀

And I am enjoying the solitude.

That’s me, only I have no blood running down my face. Yet. Still waiting on the second cup of coffee.

Anyway, I get to go back to talking to myself now. At least I know someone will listen 😉

I have noticed that several bloggers have a day set aside for blog linking, or lists, or other sundry stuff like funnies. So I decided to start my Thursday Never List™. One can never have too many lists, and at least this one won’t alarm the NSA.

One of the things my brother-in-law Draco and I used to like to talk about was movies. He has his favorites, and so do I. But we also had that list. You know, the movies we would never, EVER watch. EVER!!!! Invariably, one of us would screech at the other in disagreement over a classic, but for the most part we tended to agree on most movies we blacklisted. And so, in honor of my brother Draco, here is my list of the top five movies I’ll never, EVER watch.

#5- A Nightmare on Elm Street

It doesn’t matter which version, or sequel. I just don’t care to see some chick transmogrified into a cockroach while some dude runs around with finger blades. Though the blades are rather nice.

Seriously, who thought sparkly vampires and expressionless twits were a good combination?

Nicholas Sparks writes the same book with a different title every year.

Not to be confused with M. Night Shyamalan’s torturous homage to Nickelodeon’s Avatar: The Last Airbender, this film is so riddled with politics and plot holes, I would just as soon clip my nails in a Cuisinart™ than watch more than the ten minutes I wasted.

Ok, this is where y’all will probably hate me.

So, that’s my Thursday Never List. Feel free to admonish me for never having watched Top Gun. I get that a lot 😀

I’m sorry, but I had no idea on how to write this.

My brother-in-law, LC Draco, is in the hospital, in very serious condition due to a cranial bleed and having suffered several strokes. My heart grieves because he has been my older brother for 25 years. I humbly ask for your prayers, good thoughts and vibes, and karma for him.

Draco is a warrior, through and through. He has defied many odds and is still going strong. His road will be a long one, but he has a very loving family who will not let him walk alone.

Thank y’all for your patience, and your prayers.

This week I am hosting the Glorious Lemur King and his family, so I am not blogging as usual. But some of y’all may be wondering what we have done, so….

This is where we went:

And today we shall be going here:

And after that, we shall tour the Alamo and the Riverwalk.

And after that, we shall rest. Maybe. I’m a bit fuzzy right now.

Anyway, hope to be back here soon. I’m off to go gawk at the new electric smoker the Lemurs have been kind enough to gift us. Ta ta for now!! 😀

My Evening as Head of the G-7

And what an evening it was!

Last week, I had the absolute pleasure of visiting friends and family, and spending quality time at  The Kemah Steak Company. Situated on a quiet street in Kemah, Texas, the restaurant is vibrant and eclectic, with warmth abounding throughout, from the gleaming copper bar to the settees and mismatched tables. Though most of the areas are set up for cozy conversation, they can also accommodate larger groups as well. That was fortuitous, since there were eight of us that evening. And one of their prized features is the “G-7 Table”.

This table was once the property of former President George H.W. Bush. This was the table used for a G-7 summit, back when there were only seven industrialized nations: the U.S., U.K., France, Germany, Italy, Canada and Japan. I can only assume the last seat was occupied by Millie. The table is a beautiful discussion piece, but not as awesome as what was placed upon it. The restaurant has an ample wine list which includes imports from all over the world. Trust me when I say there is a wine here for every one.

END_OF_DOCUMENT_TOKEN_TO_BE_REPLACED

Motivation, I Have None

I can’t get motivated to do anything today. I have several projects just a step or two away from being finished and just don’t have the oomph to get them done. I’m not talking just a couple of frames or vases. I have five sculptured books, three vases, five dessert stands, five teacup pincushions, four candleholders, and about ten altered bottles. Admittedly, the bottles are only prepped and I haven’t even begun to alter them, but still. The plan is in my head. I just need the extra push to execute it!

On top of that, school prep days are this week, and next. And so is our visit with the Lemur King family. MY HIGHLIGHT!! Anyway, I need to get stuff done and organized so that they will have enough room for their stuff, and also room enough to relax, and sleep. That’s important. I figure tomorrow I will get the kids involved (read here: crack the whip) and have them help me do stuff like organize everything neatly. Once Eldest gets back from her vacation, she will help out as well.

All I know is a roast beast will be had sometime next week and I will not have anything to do with its preparation. WHOO HOO!!

In the meantime, have a Sithy!

This is not a philosophical post. Unless you are into wine. Then it qualifies.

While I was on vacation, I had the opportunity to spend time with my sister, Reno Queen. Her family is now back in Texas, and relatively closer to us. I say “relatively” because three hours is a lot closer than fifteen. Anyway, as we were out playing mini-golf (which was really cool under black lighting) we got to talking about birthdays and how we are just not ready for middle age. She insists she will live to 120, because 60 is the new middle age.

Moving along, we were talking about what to get each other for our birthdays. She had wanted to get me a really cool necklace, which I would never wear because I just don’t go out anywhere. And I was at a loss as to what to get her, because her home is still being built and she is in an apartment with limited space. And she has plenty of jewelry. I know this because I have contributed to her stash. But then, while looking at her social-site-with-faces link, we got a brainstorm.

We headed right over to the Hallmark™ store, and she chose hers, and I chose mine, after a time. I must say, my sister knows what she wants pretty well. No waffling with her. But I was torn between the new Butterfly Kisses glass, and the Wine Snob glass.

Sis: I do like the summery colors of the Butterfly glass.

Me: I KNOW! I have a thing for butterflies, but the colors of the Snob glass are gorgeous.

Sis: (compares the two glasses) Uh, the Wine Snob is bigger, and holds more. Get that one.

Me: Good point (heads over to the cashier).

This is my birthday gift from my sister!

And so my friends, this is how you choose, wisely 😉