I am not the most competitive person on the planet. In fact, sometimes I frustrate Hubby because I am content to participate, but not necessarily yearn to win, be it a board game, or playing outside, or even playing cards. Heck, you can forget about dominoes!! His grandfather was a champion, and wrote a book on the game!!

I remember back in 7th grade, our PE teacher, AKA Attila, decided we girls were not to play manly sports. As you can possibly imagine, that pronouncement did not go over well with the female contingent. But no one listened to the students back then. Anyway, Coach Attila gets it into his head that we little helpless females will learn archery. He honestly thought it was a girls activity.

We start to practice, and some of us discover we have an aptitude for it. Breathe in, find your center, pool the quiet, and let go. There’s something about the twang of the bow as you let go a sharp projectile aimed at an imaginary picture of your coach. Some of us were so proficient, that the guys who were off playing flag football asked if they could try it.

All of them got trounced, including Coach Attila. That was an awesome day.

Fast forward to 2004. While on a visit to Poland, we stayed at Zamek Kliczkow. One of the oldest castles in Poland, it had been converted into a hotel. And on the weekends, they had archery demonstrations.

The Archer was situated in what was once the moat, and invited all to come down and try their hand at bows and arrows. We all went down, since the kids were agog at the medieval trappings on display. First up was Hubby, and he did pretty well. And then it was my turn….

That is my archery trophy, presented on my birthday, courtesy of Eldest when she was only 9 years old. The only trophy I will keep forever.

Sometimes winning is the only thing 😉

I think I watched maybe…two episodes of Seinfeld during its run on TV. It never appealed to me. After all, it was really a show about nothing.

So, here’s hoping your day is full of sunshine and kittens.

Unlike mine, which is full of laundry and nausea 😉

I’m not the best housewife, or cook, or parent. As most of us do, I learn as I go, and in 17 and a half years of marriage and parenthood, I have learned a few things:

I’m sure y’all have your own list. Mine seems to be unending 😉

Sometimes it’s fun to be on a social network. You get to see what your friends are up to, and catch up on current events, and best of all, keep track of your kids and their friends. The worst part about it is the ads. Sure, I understand that’s an income generator for the network, but sometimes their ad placement leaves me wondering. This is what came up, after I had clicked on a link on YouTube:

Uh, excuse me?? Credit card application and boudoir photography? And for those of you wondering, the video was Still Alive from the “Portal” videogame. I still can’t get that earworm out of my head. And what Portal and the cake being delicious and moist has to do with boudoir photography and American Express, I still don’t know.

When Patience Pays Off

I’m not a vain person by any stretch. Well, everyone has vanities. And so do I. But most people that know me know I am a very patient person. I really don’t mind waiting for something, as long as it’s not a life-or-death situation.

Then I would get hasty.

Anyway, back when we were at our first duty station (which was in Hawaii, and I regret not enjoying it as much as I should have, because I missed being away from family <–disclaimer for Hubby), I had wanted a set of dishes from Williams Sonoma. I love that store. Yes, it’s a bit pricey, but sometimes they have really good sales. Anyway, the dishes were from the Brasserie Collection, and had red bands on the rim. And they never went on sale…

Fast forward to September 13th, 2011. Hubby and I were looking for some champagne flutes for my mom at the outlet mall, which also has a Pottery Barn outlet, which is owned by Williams Sonoma. My mother-in-law also had asked that I look for a special saute pan there, so we went in, and guess what they had on clearance?? 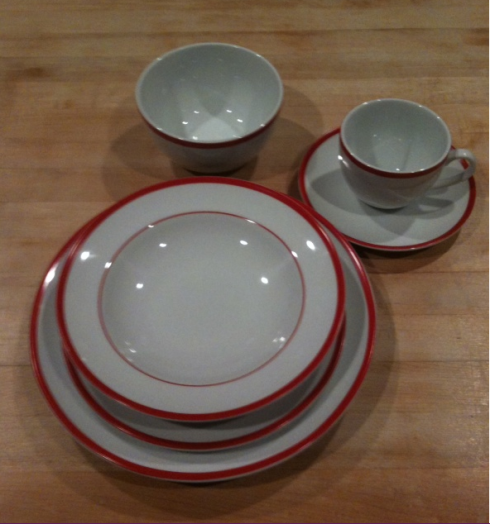 And I bought eight six-piece place settings, for the price of two four-piece place settings!!! Not bad for a 16 year wait, huh? They also had some beautiful water goblets that complimented them rather well, but I don’t think I’ll be waiting 16 years for those. I’ll just make do with regular, run-of-the-mill glasses.

My friend The Queen is married to Pirate Redbeard, a man who enjoys Sithy things, like awesome people do. Since I’m still feeling like I was chewed up and regurgitated by a mastodon, I will leave a Sithy here for Redbeard and sundry to enjoy. 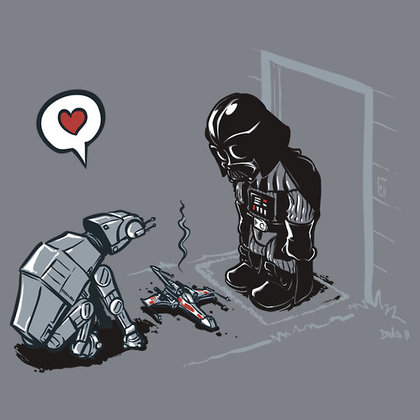 It’s a beautiful morning, nice and cool outside. It is begging me to go out for a walk and enjoy the musical stylings of mockingbirds and sparrows, but no….. I have to be home sick with the beginnings of a nasty cold. This one I got from Hubby as a loving departing gift, which he got from Eldest as a loving welcoming gift. Yay, me.

I shall make a batch of The Pioneer Woman’s Chicken and Rice soup, which will make me feel tons better. I tend to not take a lot of medication, since I have an adverse reaction to most meds. Nothing major, just most tend to totally make me loopy or put me out like a light. Nyquil is NOT my best friend. I get a better result from drinking a shot of bourbon before bed, without the grogginess in the morning. At least I wasn’t sick while Hubby was on leave!

If y’all have any recommendations for a way to feel or get better, let me know. I’m on my second box of tissues!!

I firmly believe I should have been. Well, not literally. But I have an affinity for the 1940’s and 50’s. The music, the fashions, the radio shows, the comfort foods….and the *ahem* adult beverages. I swear, if I could channel June Cleaver, I would.

And sometimes, I manage to come so close!

A friend of mine makes these wonderful vintage aprons, and I just acquired my third creation!! All that is missing is a martini in my hand. Or maybe a Tom Collins. At least in my fantasy.

In reality, it would be Alka Seltzer 😉

I miss him already.

We dropped off the kids this morning. Each one hugging and kissing their dad, as I kept a fixed smile on my face while feeling my heart leaden. We came home to pack his bag, and gather sundry last minute stuff for his trip. And tonight, after the kids have gone to bed, I will walk around the house, picking up everything he left behind, and praying for his swift return home.

Hopefully, time will fly at the speed of light.

If I had the stuff, I would totally make this.

The only thing missing is a distressed leather cape.

Can you imagine what a Steampunk Darth Maul would look like?? 😀